Winter’s Back is Broken: Signs of Spring in Michigan 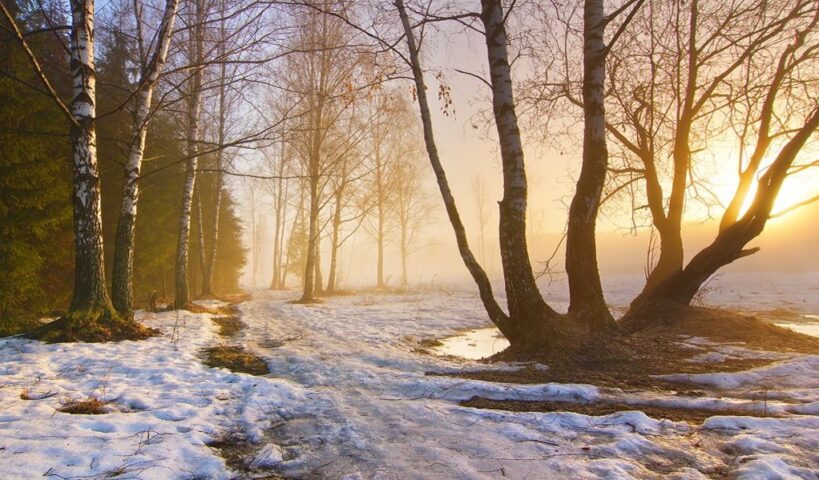 “There is something infinitely healing in the repeated refrains of nature – the assurance that dawn comes after night, and spring after winter.”
Rachel Carson

I’ve spent most my life not thinking very highly of spring. To me it has always been a feeble consolation for winter’s three-month brutal assault. Winter may have been banished with a flip of the calendar’s page, but the early days of spring have always filled me with impatience and anticipation to witness the landscape in full bloom.

On March 20th, 2022, at 11:33am EDT, the sun will cross the equator and continue northward, marking the first day of spring in the northern hemisphere.  Megalithic monuments have been built for millennia to capture this occasion, and perhaps our nearest version of this is Chicagohenge, where not unlike its namesake Stonehenge, the rising and setting sun lines up with Chicago’s east-west street grid, framing the sun perfectly within Chicago’s skyline during the spring and fall equinox. However, for many of us, the arrival of spring isn’t so much of an event as it is a feeling. How are we supposed to “feel” spring by this astronomical metric, especially in Michigan where some of our worst winter weather occurs in the month of March?

My grandpa used to declare that ephemeral turning point with the phrase, “winter’s back has broken”, where he felt he could sense the seasonal change regardless of the arrival of the equinox. Each year I anxiously await that same feeling, and recently I have found additional ways to mark the passing of winter into spring. Maybe it’s the wisdom of my advancing age or perhaps I have just grown tired of wasting so much energy begrudging this time of year, but I have come to notice and revel in the quiet gifts of late winter and early spring.  The noticeable lengthening of days and first sightings of robins in my yard are always welcome, but it feels like a special privilege to encounter the less obvious signs that a seasonal flux is upon us.

A few of us may know someone or are ourselves experienced in the art of making maple syrup. The unmistakable sound of sap dripping into the bucket, the steam rising from the sugar house, and the hard-earned liquid gold that materializes from our efforts are sure signs of the season, but most of us have never even seen a sugar shack, let alone toiled away in one. However, all we need to do is look up into the sugar maple treetops to watch the squirrels run their own sugaring operation. An Iroquois folktale explains that Native Americans initially observed a squirrel cutting into maple bark to lick the sap and found that the sweet liquid could be boiled into sugar, and the Anishinaabe people have named the March full moon the Ziissbaakdoke Giizas, or Sap Moon, to mark this event.

Maple trees aren’t the only harbingers of spring by their sap, but their blooms as well. Even in what still feels like frigid winter, I search for silver maples to tell me that spring is on its way. These trees proffer their buds as early as February, giving me a chance to clip a few branches to admire in a bud vase placed on my desk. After I have had my fill of the swaying, crimson-studded maple branches, I turn my attention towards the ground. What I am searching for is at the base of most trees this time of year: a simple ring of sun-warmed earth, its blanket of snow melted away. This phenomenon is caused by the thermic effect of the sun warming the trunk of the tree, which causes radiant heat to melt the snow around it. In these melted patches, I am likely to find the earliest budding spring ephemeral wildflowers like spring beauty, dutchman’s breeches and trout lily, to name a few. Not too far from this warming patch of earth, I might even be lucky enough to discover a frolicking swarm of snow fleas in search of new sources of decaying organic matter to feed on.

No matter how dreary these late winter and early spring days may seem, there is always a gift waiting to be discovered. It is nature’s promise to us that we too can be renewed even in the midst of seemingly bleak and depleted surroundings.

Brooke serves as the Restoration Coordinator for Friends of the St. Clair River, assisting others in pursuing conservation and restoration endeavors in their own backyards and in the larger community.