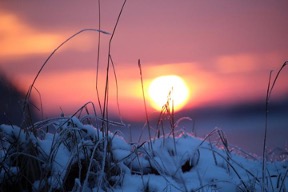 “Turn down the noise. Reduce the speed. Be like the somnolent bears, or those other animals that slow down and almost die in the cold season. Let it be the way it is. The magic is there in its power.” ~ Henry Mitchell

For those of us in the northern hemisphere, our darkened world is currently illuminated with lights, candles, fires in the hearth, and the frenetic energy of holiday preparations. Many of us look forward to the holidays, and what was once a few days’ celebration now spans about 6 weeks. It seems many of us prefer to focus on keeping the darkness at bay, even though in its own way, this time of year is just as resplendent as the height of summer. We aren’t always good at slowing down and welcoming the darkness, myself included. For many years, I have dreaded this time of year. It’s cold, it’s dark, and it’s full of cheesy commercial holiday charm. Most of our sacred ceremonies have been supplanted by the kind of consumerism that has become synonymous with the condition in which we currently find our battered earth. However, I have made peace with these changes through the refuge I have found in the quiet beauty of the winter solstice.

On Tuesday, December 21st at exactly 10:59am, the sun reaches the Tropic of Capricorn, which marks the shortest day and the longest night of the year. For me, this is the span of time during the holidays when days start running together, and time seems to stand still, losing all direction. It turns out there is a scientific reason for that: during the winter solstice, the sun’s noontime elevation appears at its lowest in the sky and seems to stay that way for a few days before and after the event. After this point, the cycle reverses and each day brings a few more moments of daylight until we reach the summer solstice in June, when the sun is at its apex and the cycle repeats itself.

All over the world, humans have been celebrating the winter solstice for almost 12,000 years.  Many people are familiar with the Stonehenge monument in England, which is believed to have served as a place for ancient peoples to practice sacred rituals at the solstice.  Less well known but just as significant are Ireland’s Newgrange and Scotland’s Maeshowe monuments, which have passageways precisely aligned with the solstice sunrise and sunset.  All these monuments are thought to have held special religious significance, but many of those beliefs and rituals have been lost to the passage of time and changing belief systems. However, regardless of one’s belief system, the winter solstice season can offer a time of quiet reflection, and the darkness can draw us together to revel in one another’s company. We may currently be facing the darkest phase of the year, but we can faithfully celebrate the sun’s inevitable return and the many blessings it will bring in the coming seasons.

The Beauty of Both

The mystery and majesty of our natural world has fascinated people since the dawn of human civilization. I don’t think it is a coincidence we have devoted spiritual traditions in accordance with the natural processes of the earth and its place in our universe. The commercialized practices of today are a relatively new phenomenon and mirror our growing disconnection from the roles we play in the many ecological systems of this planet.  Perhaps the reason so many people feel lonely at this time of year is because we are collectively longing for a time when our communities were engaged in rituals that honored the relationship between earth and its people. The good news is our ability to find meaning and connection with one another and the world around us is not lost. Transcendence is not limited to those who have a devoted spiritual practice or an expert level of scientific understanding.  We must only turn our faces to the sun who provides for us as it has since time immemorial and follow its path just over the horizon to where the cycle begins anew.

Brooke Hiller is the Restoration Coordinator for Friends of the St. Clair River and has a passion for helping others to pursue conservation and restoration endeavors in their own backyard and in the larger community.

The Solstice at Newgrange