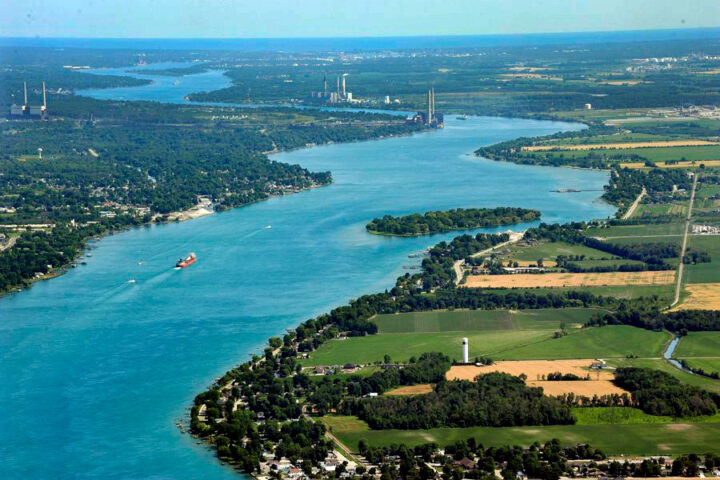 One of the feelings I often get while spending time near the St. Clair River is a sense of history, which can be a hard thing to explain.  I think everybody feels it, but actually hearing or reading the stories can help to open up our minds and help us form new perspectives of the places we call home.  From the pre-colonial inhabitants of the Blue Water Area all the way to modern industrial use, each part of the history of the St. Clair River is important to learn from and guide us forward.

Over the last four hundred years, due to logging, trapping, industrialization, urbanization and over-harvesting of fish and game, the river and surrounding forest ecosystems have been severely altered.  Originally, whitefish and sturgeon were very abundant in the river and were a staple food source for local tribes, but over-harvesting severely reduced their populations.  The surrounding forests were also very different originally and have been altered by a combination of logging, agriculture, urbanization, and industrialization.  One of the first French explorers to see the Great Lakes region called the Detroit River and the surrounding area an “Eden,” referring to the abundant fish and game and wild foraging opportunities.  The Blue Water Area was no doubt a very abundant place as well.

The original foraging, hunting, fishing and farming opportunities on the river and surrounding area would have made it a high quality place to live.  Local tribes relied on the wild abundance of the area in one way or another, and also utilized high quality soils in the area to farm.  A good portion of Southeast Michigan today is utilized for growing crops due to the abundance of fertile soils.  The river itself was used by tribes as a sort of highway as well, as were all navigable lakes and rivers in the region.  Travel by canoe was by far the most common way of tackling long-distance trips throughout the Great Lakes.  Port Huron was also a gathering and meeting place for tribes, as it was easily accessible and centrally located.

From the early sixteenth to late seventeenth century, along with the French explorers, came the fur trade.  This had major impacts ecologically, but also culturally.  The French quickly realized tribes were very skilled trappers and hunters and were sought after by companies looking to make money by selling furs back to Europe.  Beaver was the main target, as it was very abundant and the most prized fur in Europe.  Beaver are still found in St. Clair County today, but in much lower numbers than originally occurred.  Deer, marten, raccoon, fox, bear, otter, and muskrat were also hunted or trapped for their furs.  Over time, the combination of the use of guns (new to North America at the time), and the knowledge of the land and animals that was held by local tribes, was enough to decimate beaver population across the Great Lakes.  This was also a period of cultural change as tribes had begun trading with Europeans, and the introduction of guns and many other metal products such as pots and pans made substantial impacts on native cultures.

Not long after the fur trade began to lose steam, the logging era began in Michigan.  The logging era in Michigan generated a lot of wealth as White Pine was very abundant throughout much of the state and in high demand for construction.  The target was White Pine, but as the pine forests began to shrink drastically, other species were targeted.  The St. Clair River shoreline was once lined with a combination of hardwoods and pines, so both were originally available to loggers in the area.  There are many tales and legends of the logging era in Michigan but one observation is that this was a time of ecological devastation.  A lot of forested land in the state was wiped out.  It’s been noted that at one time before the logging era a squirrel could travel from Lake Michigan to Lake Huron without ever leaving the forest canopy.  A section of original White Pine forest still exists in Grayling at Hartwick Pines State Park, and I would highly suggest checking it out.

The logging boom in Michigan ended in the Lower Peninsula around 1895 as the forests were nearly over-harvested by then, and around 1910 all forests in Michigan were almost wiped out.  At that point farming was taking hold in southern Michigan, but also commercial shipping on the Great Lakes was already growing rapidly.  In the early twentieth century, the original structure of the St. Clair River was altered by what is called dredging.  Dredging is a process that deepens the original channel so that larger ships may pass through.  There is ongoing debate that this process may have lowered lake levels, but it did have ecological impacts as river bottom habitat was significantly altered.  Through the shipping industry, invasive species have been introduced to the Great Lakes through the emptying of ballast water.  Invasive species, not just from commercial ships, are a large problem and I wanted to mention it, but will save more for another day so that this doesn’t run on for twelve pages.  Today many ships navigate the St. Clair River and shipping on the Great Lakes remains an important industry.

The St. Clair River is full of rich history and I only touched on it here. The modern river as we know it today is industrialized and urbanized, but still offers many beautiful views, recreational opportunities and very tasty fish, in my opinion.  I prefer a Great Lakes-caught Yellow Perch over any fish in the world any day, and that is partially what keeps me driven to help keep the river clean.  Learning history is important, but keeping those close personal connections that we have to the land is important in keeping the spirit of it all alive.

For more information and history of the St. Clair River check out these sites:
http://www.bluewaysofstclair.org/culturehistory.asp?ait=cv&cid=9
https://project.geo.msu.edu/geogmich/furtrade.html

Zach is the Field Intern for the Friends of the St. Clair River. He is completing his Environmental Science bachelor degree requirements from Oakland University. He grew up on the St. Clair River and loves everything about the river and its inhabitants.