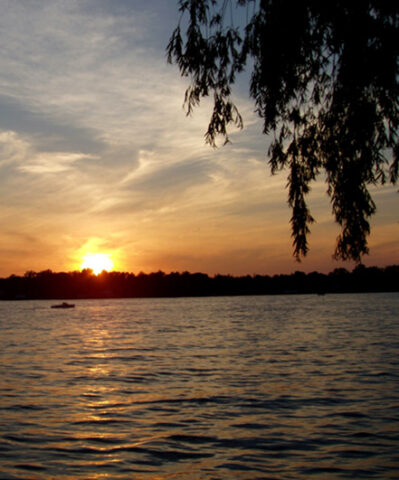 April 15th, 2022 will mark the 50th anniversary of the signing of the first Great Lakes Water Quality Agreement between Canada and the United States.  Acknowledging the degradation of the Great Lakes ecosystem, the Agreement affirmed both countries’ commitment to restore and enhance Great Lakes water quality with specific water quality objectives.  Cooperation on the Great Lakes between Canada and the U.S. began with the 1909 Boundary Waters Treaty, which formed the International Joint Commission that was to report to the two governments on Great Lakes issues.  The Joint Commission’s 1970 report on pollution in Lake Erie, Lake Ontario and the St. Lawrence River directly led to the 1972 Great Lakes Water Quality Agreement.  Excessive algae growth due to phosphorus, especially in Lake Erie, was a specific target of the 1972 Agreement.  The success of this binational effort led to a joint commitment to continue cooperation on Great Lakes environmental issues.

In 1978, the Agreement was updated to address persistent toxic substances, which can remain in the environment for a long time causing health and survival problems for many species.  Recognizing the need for an entire ecosystem approach to restoration, the 1987 Protocol to the 1978 Great Lakes Water Quality Agreement introduced the Area of Concern program.  Originally, 42 Areas of Concern were identified as being areas within the Great Lakes that were highly polluted and exhibited environmental degradation.  The St. Clair River is one of those Areas of Concern.   Because each area is unique including bays, rivers, connecting channels and tributaries, types of pollution and potential restoration strategies, Remedial Action Plans were developed for each area.  Possibly the most unusual aspect of the 1987 Agreement though, is the requirement for public consultation in the development of the Remedial Action Plans.  This in turn led to the development of Public Advisory Councils and in the case of the St. Clair River, a Binational Public Advisory Council.

Our St. Clair River Binational Public Advisory Council is made up of a variety of stakeholders representing municipalities, business and industry, environmental groups, First Nations, education, health, community groups and private citizens from Canada and the U.S.  Since 1987 we have been working with our Canadian colleagues and the governments of Michigan, Ontario, Canada and the U.S., to restore the St. Clair River. Our work has removed sources of persistent toxic substances, reduced spills to the river, enhanced habitat for fish and wildlife, reduced bacterial pollution from combined sewer overflows, removed contaminated sediment and insured a safe source of drinking water.  This has all been the result of the Great Lakes Water Quality Agreement.  As contaminants decrease in fish, residual contaminated sediment is addressed and drinking water is safeguarded we draw closer to celebrating the restoration of the St. Clair River.

As Areas of Concern are restored, the focus is now on improving and sustaining the environmental progress we have made.  Moving forward, as new threats to the Great Lakes emerge; the 2012 Protocol to the Great Lakes Water Quality Agreement is committed to strengthening the efforts of the earlier agreements.  This includes an ecosystem approach, public consultation, triennial public forums and a focus on sustainability to insure the benefits and enjoyment of the Great Lakes for the present and future generations.

Paulette Duhaime graduated from MSU with a Masters in Fisheries and Wildlife, specializing in environmental toxicology. She has worked in the chemical industry and in research facilities.  Currently she is the U.S. Co-Chair of the St. Clair River Binational Public Advisory Council and has been a member for 24 years.